As the holiday season approaches, many shoppers will rely on a segment of infrastructure that is becoming increasingly more vital to the U.S. economy: e-commerce infrastructure.

Consumers’ growing reliance on e-commerce highlights the importance of the infrastructure that underpins it and demonstrates why some industrial REITs tied to the trend are a part of Reaves’ essential service infrastructure portfolios.

The number of packages moving through U.S. shipping infrastructure continues to grow as evidenced by the 24.4% jump in online retail sales for the year ended 6/30/21.1 The spike in e-commerce sales during the pandemic, we believe, has helped many consumers who were previously reluctant to shop on their laptops or mobile phones, become more comfortable with the process. As the chart below shows, while ordering through Amazon or other sites might be routine for many, e-commerce penetration is still relatively low as a percentage of total retail sales. 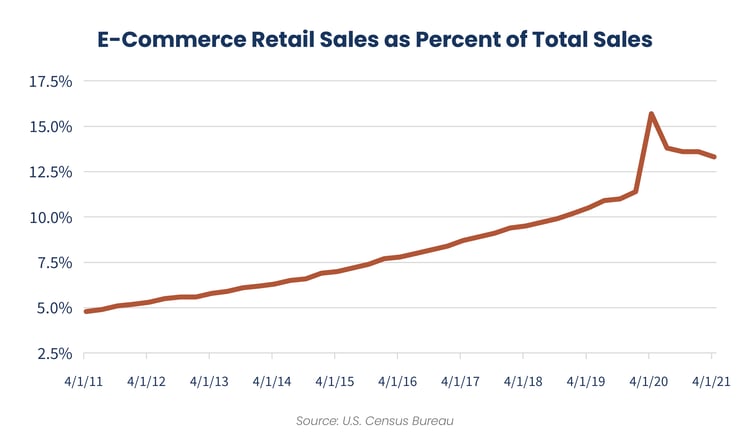 What does this mean for infrastructure?

To support e-commerce growth, companies such as Amazon require large distribution facilities. These facilities must also be in or near large urban centers, where most e-commerce customers are located. Industrial REIT companies own the real estate that facilitates this distribution and, we believe, should be prime beneficiaries of the e-commerce trend over the next decade.

These locations have scarcity value given limited land availability, zoning challenges, and alternative uses, such as apartments, that command higher rents per square foot. An e-commerce retailer may be willing to pay a premium for the superior location as real estate is typically about 5% of its total operating expenses, which is more than offset by the benefits they reap such as speed of delivery to consumer.

Industrial REITs currently own and, we expect, will continue to develop the distribution and warehousing infrastructure necessary to accommodate the future growth expected in e-commerce. Their characteristics, including steady growth and superior locations that provide high barriers to entry, are some of the reasons we focus on infrastructure businesses supporting our modern economy.

Expect these companies to play a vital, behind the scenes role, supporting shoppers through the holiday season.

Disclosures and Definitions:
Reaves Asset Management is an investment adviser registered with the Securities and Exchange Commission under the Investment Advisers Act of 1940. Registration does not imply any skill or training. Reaves is a privately held, employee-owned “S” corporation organized under the laws of the State of Delaware.

E-commerce penetration is a term that means the percent of retail sales that are conducted electronically as a percentage of all retail sales (both online and in physical stores).

Scarcity value is an economic factor describing the increase in an item’s relative price by an artificially low supply.

All investments involve risk, including loss of principal. All data is presented in U.S. dollars.
Cash is cash and cash equivalents.
An investor cannot invest directly in an index.
Important Tax Information: Reaves Asset Management and its employees are not in the business of providing tax or legal advice to taxpayers. Any such taxpayer should seek advice based on the taxpayer’s own individual circumstances from an independent tax adviser.
Fees: Net performance reflects the deduction of advisory fees which are described in detail in our Form ADV Part 2A.
Please contact your financial professional, or click the following links, for a copy of Reaves’ Form ADV Part 2A and Form CRS.
Additional information about Reaves may be found on our website: www.reavesam.com.
2021 © Reaves Asset Management (W. H. Reaves & Co., Inc.)